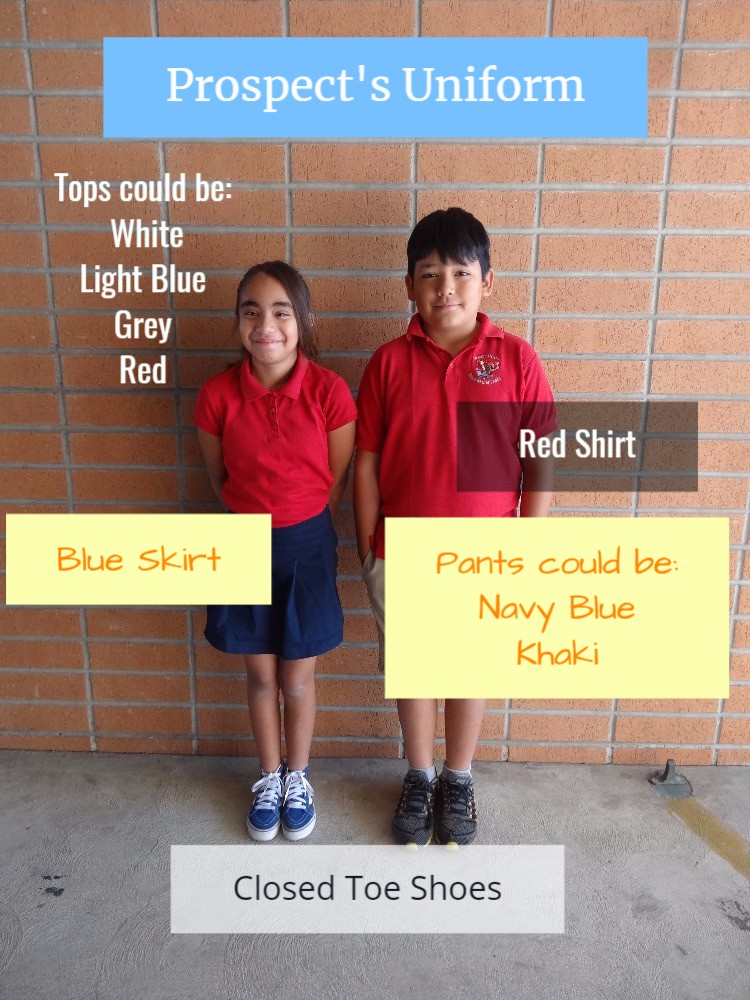 Prospect has a Dress Code Policy which is in alignment with the district’s policy.   Students are prohibited from wearing any clothing which is disruptive to the instructional process and/or considered unsafe, dangerous, divisive or a health hazard.  Also prohibited are clothes which contain offensive or obscene symbols (depicting alcohol, tobacco, drugs, weapons, vulgar language, violence, vandalism, or sexual activity), signs, slogans, or words degrading any gender, cultural, religious, or ethnic values.  Clothing, accessories, or any manner of grooming which is considered to be gang related is not allowed.  Parents may request a Uniform Waiver during the first two weeks of enrolling at Prospect School.  They will need to make an appointment with the Principal to discuss the hardship in wearing a school uniform daily to school and to fill out the Uniform Waiver. *Any violation of uniform/dress code policy will result in a referral to the office and the parent will be contacted to bring a change of clothes.

Hats, headbands, bandanas, hoods on sweatshirts or any unauthorized headgear is not to be worn during instructional time. *Hats/caps may be worn for sun protection during recess only.

Belt buckles must be plain with no initials on them.  Belts will be the appropriate length for the student's waist size, and the belt must be kept in the belt loops.

Jewelry that is considered dangerous may not be worn, such as large hoop (1” diameter or more) or dangly earrings, necklaces, or bracelets.  No chain belts, studded belts, or wallet chains are allowed.  Make-up is not to be worn during the school day. Chapstick is permitted.

Size appropriate cold weather jackets, sweaters and sweatshirts may be worn.  No sports team logos or sweatshirts that depict gang association, or inappropriate pictures or words should appear on the clothing.

Hair color may not be a distraction to the learning environment.